As a gigging and session guitarist it’s important to have a wide range of great sounds. I love guitars, amps and pedals and over the years have developed a few preferences for mics and recording techniques. Having a wide range of gear helps make each session unique, and provides the opportunity to create recordings that fit the track nicely before hacking away with plugins.

I have artist support deals with The GigRig, Effectrode, Dunlop Accessories, Way Huge, MXR and Mono cases, and am proud to use their gear regularly.

Acoustic guitars:
Martin J-40 – narrow-waisted jumbo, beautifully even, classic tone that sounds familiar and just sounds like a record before putting a mic anywhere near it.
Webber 00 – smaller Sitka/Sapele body, ebony fingerboard. Rare, handmade, very articulate and balanced, does delicate and intimate lead and finger style brilliantly.
Unknown Japanese Nashville-strung dreadnought – found on Denmark Street, strung with the top octave of 12-string set. No idea what it is but has a magical sound that you can hear on some of my idents.
LAG Tramontane – a bit brighter and less complex than the Martin or Webber, has a very pure sound with new strings and can be heard on the “Acoustic #” samples.
Recording King RO-27 – big fat neck, has the OM Martin vibe and has a mid-rangey, kind of lo-fi folky sort of tone.
Godin A6 Ultra – not strictly speaking an acoustic, it’s a hybrid electro-acoustic that has a unique range of sounds all of its own, great for modern RnB

Electric guitars:
Gibson ES-335 – the most versatile guitar of all time, this is a beautiful mid-90s cherry red example and is all-original – just an awesome tone.
Suhr Pro S4 – immaculately and American made Strat-style guitar – this gets used on a lot of sessions due to its reliability and versatility
Fender Japan ’52 reissue Telecaster – customised with Kinman and Fralin pickups, Callaham brass saddles and electronics.
Ibanez Jem 555 – great rock guitar, darker than the Suhr and great for metal and rock.

In terms of amplification, times they are a’changin’. Until very recently I would have been insistent that to get the most from a session, guitar tracks should generally be recorded through a good valve amp with a carefully chosen mic. I’ve tried the modellers and software stuff and although it can have its uses it often falls some way short – especially when you start stacking up a few tracks. The exception now is the Kemper Profiling Amplifier. I can’t exactly how it works but it’s a digital device with the interface of a traditional guitar amp which ‘samples’ the sound of a signal chain – in most cases an amp and a mic – and when you play through it, you get that sound. The exciting bit is that you can sample – or profile – hundreds of amps. It works eerily well! Shortly after getting it I spent a day in State of the Ark recording studios in London, profiling some legendary vintage guitar amps including a 1959 Fender Bassman, Marshall JMP 20 and my own Engl Steve Morse 100w head) with various combinations of mics: Neumann U67 (the valve sister of the even more loved U87), Sennheiser e906, and a Royer 121 (a wonderful ribbon mic renowned for its sound on guitar cabs).

1959 Fender Bassman 4×10, Neumann U67, Sennheiser e906. One of the best guitar tones I’ve ever got, successfully profiled and always available.

The EMI TR12345 console at State of the Ark studios, where we mixed and summed the guitar mics during our Kemper profiling session

We set up the amps in the live room, mixed and summed the three microphones though the EMI TG12345 console (see photo and caption below for more on this!) and did the profiling from the control room. We played guitar to A/B the profile and the real amp/mic/desk chain through the studio monitors and were blown away by how close it got – in some cases the difference between these almost unobtainable amps and mics and the profiles was imperceivable. I now have a great range of profiles and it’s these that most of the time I’ll be using on your electric guitar track recordings.

Creating Kemper guitar amp profiles at State of the Ark studios, London. We mixed and summed the three mics on the old EMI TG12345 console. The TG12345 was designed in 1968, contributed to the sound of albums like Abbey Road, and Waves made a plugin from it so not a bad option! Here I’m deciding on a mic blend as we take some profiles of my Engl Steve Morse amp (head on the chair next to me, cab is in the live room). Kemper is on the right in the rack case.

Live I’m still using traditional guitar amps but am contemplating the switch to the Kemper there too.

At the heart of my traitional electric guitar amp and effects set up is the GigRig G2 . This is an all-analogue true bypass pedal switcher and controller footswitch that enables me to have ready for use as many effects pedals as needed without having to deal with the compromises that come with having a large number of guitar pedals (and all the extra cables) in-line between the guitar and the amp. Even when they’re off some pedals can negatively affect guitar tone and by the time the signal reaches the amp it can often have deteriorated substantially. The G2 lets you completely those bypass pedals not in use until you want them. It also does some other cool stuff like amp switching, MIDI control for external devices, precise gain structuring and so on.

The GigRig guys are the top bods, with their stuff being used around the world by many of the world’s top musicians including my heros Ed O’Brien, Guthrie Govan, and Paul Stacey. They’re also lovely people. I would urge anyone interested in guitar tone to check them out: www.thegigrig.com

Head honcho Dan Steinhardt (who is also a mean guitar player!) customised my G2 for me. Here’s us at their lab:

Here’s an early iteration of the board in question: 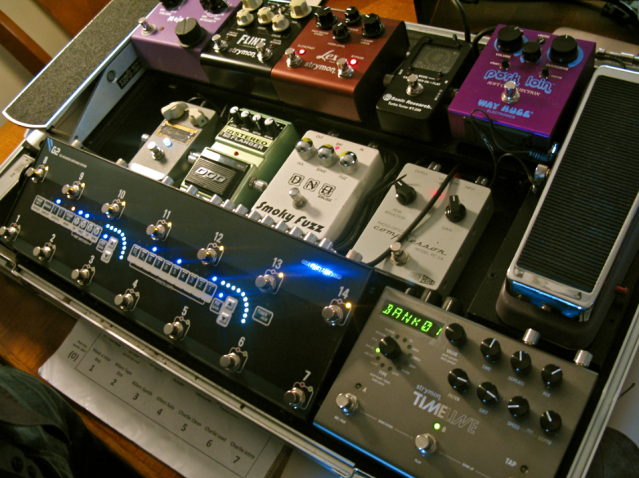 In addition to the Kemper, my main amp is an ENGL Steve Morse head, which is a versatile all-valve 100w MIDI-switchable amp. I also use a MESA Boogie DC-3, a 35w valve combo I’ve had since 1997 and love dearly.

Additionally I sometimes use an Effectrode Blackbird, which is an all-valve preamp. It’s basically the front end of the classic blackface Fender, with an additional high gain drive channel which gets into so-called Dumble territory. Coupled with an appropriate speaker sim plugin (I prefer Recabinet) this can provide some great tones.

Like Loading...
I love this band. @monkeyselfie
This is who I am now
This album man… Posted @withregram • @solaceinthesky THE WITCHING ALBUM IS RELEASED TODAY! Available across all major platforms- Spotify, Amazon, Apple, YouTube, *BANDCAMP* - all links are on my bio! Excuse me whilst I get incredibly up in your face about it all day!!!! 🤣
First gig back: 1 song, 1 closed District line, 1 mad rush. Just like old times. Was almost too much 😂 With @thebeverleycraven @judetzuke @juliafordham
This video is a beast, and so is the @digitechfx Drop pedal. Full review and guide on my YouTube channel. How far ahead of the competition is this pedal, SEVEN YEARS after it was released? Also: cheeky shout out to the man @petethornguitarist - always an inspiration!
New video coming later today (well, in an hour)
It’s finally bloody warm!!!!!
Joyous and hilarious hiking in Hastings with these utter beauts
Made a video about panning effects using sends in Logic Pro, came up with this thumbnail - without the video title it’s a bit open to interpretation.