Hello kind folk, I hope your 2016s are looking collectively magnificent, or at least better than 2015! Thank you for reading the blog again. 2015 was a pretty poor effort in terms of keeping up to date here so bear me with if this one turns into a bit of a session. A lot happened last year – I worked with a really diverse range of musical acts, I moved back to London and there have been some significant upgrades to the online session studio gear.

Firstly, most recently and quite importantly I’ve started to use the Kemper Profiling Amplifier on some electric guitar recording sessions. I generally don’t at all enjoy digital ‘simulations’ of guitar amps but I had the opportunity to borrow one from a friend and it knocked my socks off. It really is a completely different thing to the AxeFX/Line 6/Amplitube modelling stuff, and when profiling one of my own amps the difference between the amp and the Kemper profile was negligible. I was expecting to find fault with it but it’s spookily accurate and actually feels good to play – plus it’s incredibly practical. I can see it making its way onto a lot of guitar tracks in 2016.

Session-wise things have been going great. I contributed guitar tracks to a beautiful recording by John Cavanagh, a version of Lindisfarne’s Winter Song. In May the album received a gold disc from Universal Music.

In addition to lots of new clients from all over the world (if not for the exchange rate I’d be doing great business in Brazil by the way) there have been some great projects here in the UK. A gold disc album for Universal Music, Game Of Thrones acoustic guitar recording, a dozen or so tracks for an independent album release, more soundtrack work for Unilever, BFI film soundtrack proposals, rock guitar tracks and contributor status for The Drama Dolls, and I wrote and recorded a ‘circus metal’ rock track for a Halloween scare maze. I played on some really cool hiphop and R&B tracks, some brilliant pop music and even a couple of downtempo world music/Indian dance tracks. Really diverse, challenging at times but very rewarding. 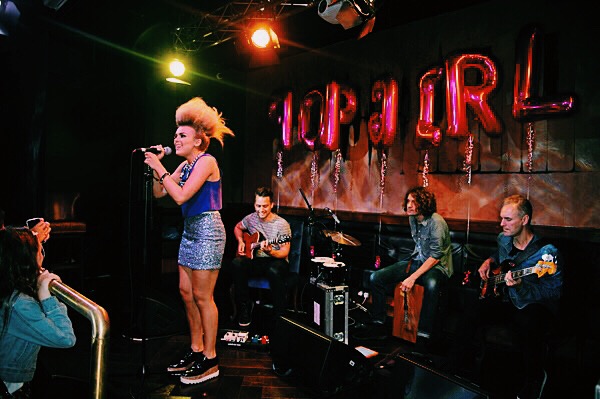 There’s been more work outside my studio, including a fun day at Metropolis with Liam Nolan who recently engineered the new Adele album and Clean Bandit’s ‘Rather Be”, and had a brilliant day recording with Paul Turner from Jamiroquai. As I mentioned at the time, working with Paul was a real education in good vibes and feel and the Tallia gig we did together was the grooviest ever. 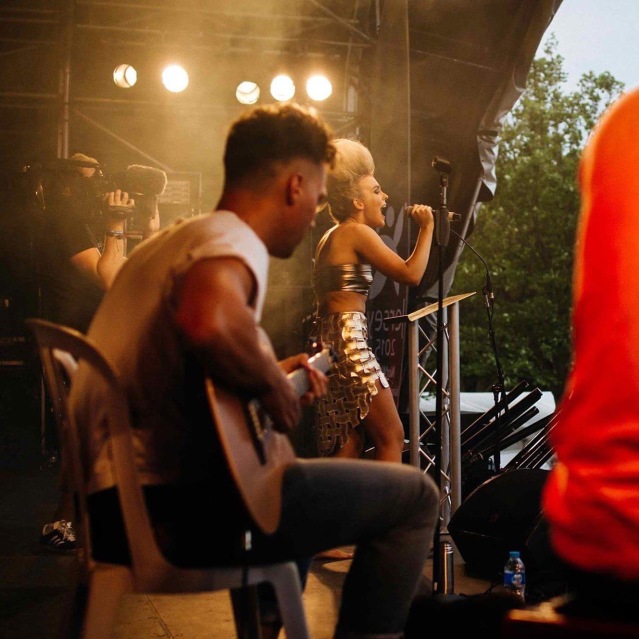 Playing live with Tallia Storm in Jersey, with Godin A6 Ultra

Speaking of which, Tallia has had some entertaining gigs this year. A couple of big festivals in Jersey, and live gigs for MTV. Loads of fun as always and wonderful to see Tallia developing as an artist and performer. 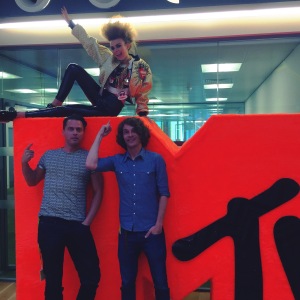 In Jersey I went surfing for the first time, and loved it. Subsequent trips to Devon, Cornwall and an impromptu session in Scarborough followed, with mixed success. One of the things about 2015 was that I realised I didn’t have a hobby. I enjoy much of what I do in music and I suppose to a degree stuff like guitar gear and pedals is a fun aside from the actual business of recording, writing and performing, but it hasn’t been what you’d call balanced. I realised I need something outside music, something I can openly fail at, get better at with friends, and reconnect with the outdoors a bit. I’m looking forward to things warming up a bit in 2016 and ‘getting back in the sea’! 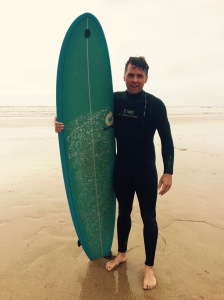 Funnily, the surfing bug bit not long after I got back from LA. My wife and I spent a couple of weeks driving around California, including the Pacific Coast Highway where we drove by/stopped to gaze at some of the best spots. Highlights include a blissfully peaceful sunset in Big Sur:

And here’s me being a tourist at Griffith Observatory in Los Angeles: 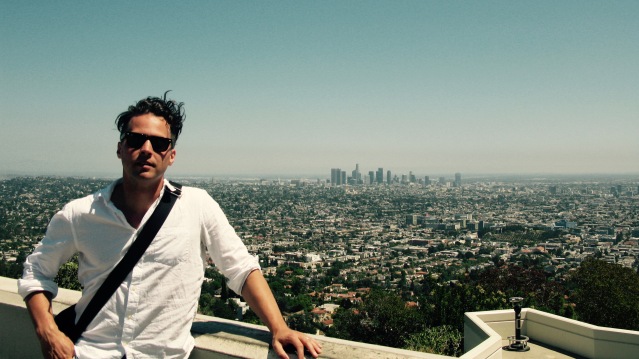 No more holiday photos. I wasn’t overly impressed with LA itself, but I have been missing living in a city a bit. We moved back to London in the middle of the year and am very happy to be back near family, friends, and also work. I’ve been gigging with quite a few different bands, including a couple of the leading party bands in the UK. After following their work for years it’s been great to meet and strike up a friendship with the lovely folk from Madhen, particularly Martyn and Andy. Probably the biggest professional party band in the country, the whole band are open, generous people and great company. I saw them live and and if you’re planning a serious event they’re your guys! If they’re not available, you might even get a recommendation for MonkeySelfie who have also had a decent year, moving from a 5-piece with keyboards to a 4-piece with track. 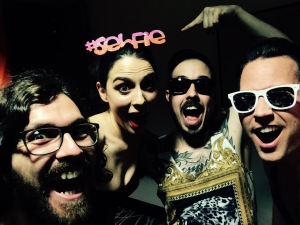 MonkeySelfie backstage at a gig for Virgin Media in December

Recording those tracks to a deadline was a lot of fun I can tell ya… I did a bunch of gigs on guitar for Madhen’s brilliant option band CandyAmp, including a fun one in Geneva.

So that’s about it for 2015. If I met you, or worked with you for the first time this year, thank you. It’s been a great time for new faces and funny, kind, talented souls too numerous to mention and I hope to work with you again this year!

Oh I upgraded my studio computer to a 12-core Mac Pro with some nice shiny new plugins. I’m hoping that a more up to date OS and FCPX will help me improve the quality of my video output. Apparently there aren’t enough videos of people playing guitar on YouTube…

It should also enable me to ensure that the quality of the custom guitar tracks I record in 2016 will be better than ever. I hope you have a super year and will try to keep the blog more up-to-date. Sorry it’s such a long one (TWSS). In the meantime, keep rocking!

I’m mixing a song in a hurry live on YouTube -2pm today. Link in bio!
Recording (and filming) for friends today - video coming soon hopefully. . #guitarist #sessionguitarist #guitarsession #online #remote #vest #snoopdogg
I’m going LIVE with Liv Austen on YouTube at 6pm. The production on these streams has been getting better and better and today we are hoping to accomplish something of a tech miracle. Join us on Liv’s YouTube channel at 6pm or catch it any time afterwards (it’s fun in real time as you can chat to us). #livemusic #ukmusic #sopro #ukcountry #teehee
New record coming out from @livausten! We recorded this mostly before lockdown - not that it would have made much difference - but it’s a really interesting collection of songs and I like the sound of the EP. I’ll be joining Liv as she streams on her YouTube channel most weeks too, we’ll play some songs and discuss things. Posted @withregram • @livausten This Friday I’ve got a little treat for you. 4 of my favourite songs from the early 00s, reimagined. popsicle, out April 10. I will be celebrating the release with a stream on my YouTube channel at 6pm GMT on Friday. Come hang, and ask me any questions you have about the release!
Ah, the last gig with @MonkeySelfie and the legendary @djrosiespins before the lockdown... Posted @withregram • @monkeyselfieband We miss gigs... Especially ones where we get to hang out with @djrosiespins! 😍 (repost @djrosiespins)
Lovely hearing these two writing next door today @livausten @abbyinez #songwriters #guitar #dontcrossthesewomenyouwillendupinasong
How was this a year ago? I remember playing Bush Hall with my new @tanglewooduk that I’d got the day before, and it was spot on. TFHM Liv! Posted @withregram • @livausten This time last year I went out on tour with @officialsarahdarling. So grateful to her for letting me join her for some fantastic shows around the UK, it was a privilege to become so familiar with the brilliant album that is Wonderland. Thank you to everyone who came out to see us, I loved singing for you and meeting you all! 🎶🌟 Where would you like to see me play next?
Quiet, laid-back gig with @monkeyselfieband in London at the weekend. 🔥🤟 #partyband #guitarist #customvideo #corporateevents
I have an Instagram account for my photography. I’m just getting started but I am falling in love with it. I’m using a FujiFilm A-7X, manual and fixed lenses, and will be mostly trying to capture and present things that I find beautiful or interesting. It’s @jon_wri